Warning: Use of undefined constant REQUEST_URI - assumed 'REQUEST_URI' (this will throw an Error in a future version of PHP) in /homepages/7/d165246649/htdocs/clickandbuilds/WordPress/Goodman/wp-content/themes/thestory/functions.php on line 50
 How deadly spin could be killing your retirement | Here lies your money
November 5, 2014  by Leonard Goodman

How deadly spin could be killing your retirement

An insiders view of insurance companies and their media spin machine. It’s not working for you!

You may not yet have read my book, Why Are Canadian Seniors Worth More Dead Than Alive? or heard about why “life settlements” are financially helping millions of seniors around the world – except in Canada. And if you’ve heard a “negative” story concerning life settlements, it is because misinformation is being spun by Canadian life insurance companies to prevent people from maximizing the inherent value in their life policies – in an open, free and fair market system.

My recently published book (July 2014), lays out the egregious financial disservice Canadian seniors are suffering from because of life insurance companies’ action and inaction. If you want further insight on the action they take to keep people in the dark, read Wendell Potter’s book, Deadly Spin (2010). If you want to know about their inaction, and the potential value you have in your insurance policy, read my book.

Life settlements – the time has come!

In the case of life settlements, my book demonstrates why millions of Canadians who own a life insurance policy cannot maximize their policy’s cash value in an open, market system. I cover, in detail, why it is wrong and how the time has come to fix a blatant oversight that prevents millions of seniors from benefiting financially. The purpose of the book and my goal is to inform the public so that they can be the catalyst that leads to changing the egregious regulations on the legislative books of six Canadian provinces.

The problem is spinning – and it’s out of control

This is a two-pronged problem: 1) It is manipulation of the free market system by insurance companies; and 2) It is perpetuated by the insidious insurance PR machine, and unwittingly or otherwise, by the media’s lack of interest and investigative journalism. An October article in Investment Executive (IE) is a good example.

In short, the editor and a writer at IE ran an ill-informed and misleading article, Insurance: Policy sales, transfers under fire. Ontario regulator says advisors may be on the wrong side of the rules. At best, it misrepresented life settlements and at worse, was a major disservice to Canadian seniors and the financial advisors and brokers who serve them. (See updated postscript at end of this blog).

Millions of dollars, even billions are at stake

Let me be clear, I was interviewed for an hour by the writer, a Ms. Harman, and she had had a copy of my book for several weeks. There is no doubt that she had an opportunity to gain a clear understanding of life settlements and how they are different than other services and products that too often get co-mingled with life settlements. The question is: Why would a well-respected publication like Investment Executive not produce thorough, balanced, fact-based coverage of this most important issue in the financial sector? And why would IE editors allow Ms. Harman to co-mingle a number of non-related or marginally related subjects with life settlements? Viaticals, STOLI and borrowing against life insurance are quite different from life settlements and to treat them as she did is a disservice to readers and the aging Canadian boomer market. They deserve to know what millions of people in other countries know and have the opportunity to access an asset that is theirs. In the United States alone, over $7 million a day is being received by policy owners through life settlements.

The current potential for life settlements in Canada is estimated to be $40 billion and that is based on just 5% of the total, in force, life insurance policies in only four Canadian provinces: Saskatchewan, Quebec, New Brunswick, Nova Scotia. In the United States the market is projected to be $140 billion in 2015 (Source: Conning Research). There is a great need to unlock the hidden asset value in millions of life insurance policies and one stroke of a government pen can dramatically improve seniors’ opportunity to financially improve their retirement years. 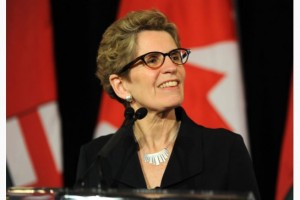 Current reporting, and the confusion it causes, compounds what is a well-documented problem for our aging population as they face declining financial security in retirement. The problem is serious enough that Ontario Premier, Kathleen Wynne proposed establishing an Ontario Pension Fund during the recent election campaign. And yet, the media has largely ignored or improperly and inadequately reported the significant benefits life settlements could play in mitigating a portion of the looming financial crunch. Most have not fully investigated life settlements as a valid financial option for millions of people. Nor looked into why life settlements are among “the most highly-rated investments available,” as ranked by Franklin Templeton, “ … in the same league as government bonds.”

Ironically, IE magazine ran another article on Oct. 31, 2014 titled, Financial literacy strategies must take seniors’ needs into account by Lee-Anne Goodman (no relation). In it, they quoted Susan Eng, vice-president for advocacy at CARP, who said the study reflects what her organization is tackling: “Not only do seniors not have enough money saved for their own retirements, but as they try to invest for their retirement, they are often vulnerable to shark activity by financial advisers.” This is a valid point, in part. As are other points in the article. Eng said,”They are losing their life savings, and that concerns us the most.” The article also stated that “The number of Canadians working past the age of 65 has almost doubled over the last seven years. There are now close to 600,000 seniors still in the workforce.” The article goes on to state that Eng says governments of all levels must do more to encourage registered pension plans, and to crack down on financial predators who target seniors. And yet, there is not one mention of the financial benefits that life settlements are providing to lighten seniors’ financial burden, around the world – except in most of Canada. Why are life settlements so ignored by organizations like CARP, Advocis (the association of Canadian financial planners) and the media in general? Or is this part of what Wendell Potter calls the “dark art of PR?” Are organizations like CARP (who receive significant advertising revenues from insurance firms) using code words like “shark activity” and “financial predators” to imply or co-mingle life settlements with pejoratives like “viatical and “STOLI?” Just as Ms. Harman’s article did. 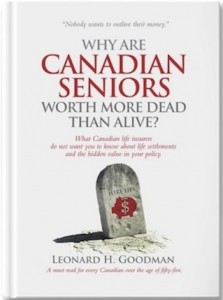 I cover in my book why life insurance companies are dead against life settlements for self-serving interests – profits. And why they are not putting  customers’ interests first. They are the main reason for the lack of open discussion in Canada.

Current regulations prevent policyholders from being able to sell their policies in an open market, for a fair market value, in a well-regulated industry. In my book, I share my personal experience as to how one life insurer tried to intimidate my firm and stop us from offering life settlements. I suspect such intimidation practices are a regular occurrence between insurers and insurance brokers. Now, as I work with others to change the existing, harmful government regulations, I expect the insurance company lobby and spin machine to shift into full gear. I only hope – trust – that the Canadian media will not “fall for” the spin Wendell Potter describes in his book, Deadly Spin.

There is nothing so dangerous as ignorance in action. – Goethe

If financial advisers and brokers are uninformed or misinformed by erroneous reporting about life settlements they cannot best serve their customers. And although they may not be engaging in what Ms. Eng called “shark activity,” or what Ms. Harman called being “on the wrong side of the rules,” they are still complicit through ignorance.

A well informed adviser should start with an understanding beyond a myopic Canadian market view, one that investigates the real value of life settlements, and how it is bettering the lives of seniors in the United States, Europe and globally. That responsibility rests with the industry professionals, many of whom are members of Advoics and yet, Advocis seems to be ignoring the veracity of life settlements and the benefits available to their members and Canadian seniors.

From CNN, Fox and NBC to Investment Executive and industry newsletters, responsibility is lost in the tumultuous news cycle.

The buck stops where?

Obviously, each financial adviser is responsible for his or her expertise but if they are unaware of the full story or get superficial information, then the burden of responsibility shifts to the “messengers,” which, in most cases, are the associations (Advocis, CARP, CLHIA, et al). But the public media also have a role. If the messengers provide only half the story or distort the facts or spin the information, then they are abdicating their responsibility to deliver a fair and balanced perspective to the public, their customers.

In the hurry-up culture of today’s media, vigilance and in depth reporting has been abandoned. Most of the news is bleached of substance in the 24/7 digital world of CNN, Fox, Twitter and You Tube. The media are caught in the crush and depend too much on the false information spewed out by the insurance PR machines. But somewhere in the pell-mell rush to deadlines there must be – needs to be – some responsible, in depth, principled, investigative journalism.

Subsequent to the October Investment Executive article by Ms. Harman, I met with the publisher, Ms. Ozy Camacho and was invited to write a column regarding life settlements, which I have done. The first column will appear in February.