Warning: Use of undefined constant REQUEST_URI - assumed 'REQUEST_URI' (this will throw an Error in a future version of PHP) in /homepages/7/d165246649/htdocs/clickandbuilds/WordPress/Goodman/wp-content/themes/thestory/functions.php on line 50
 Seniors get the math | Here lies your money
June 8, 2015  by Leonard Goodman

Seniors get the math 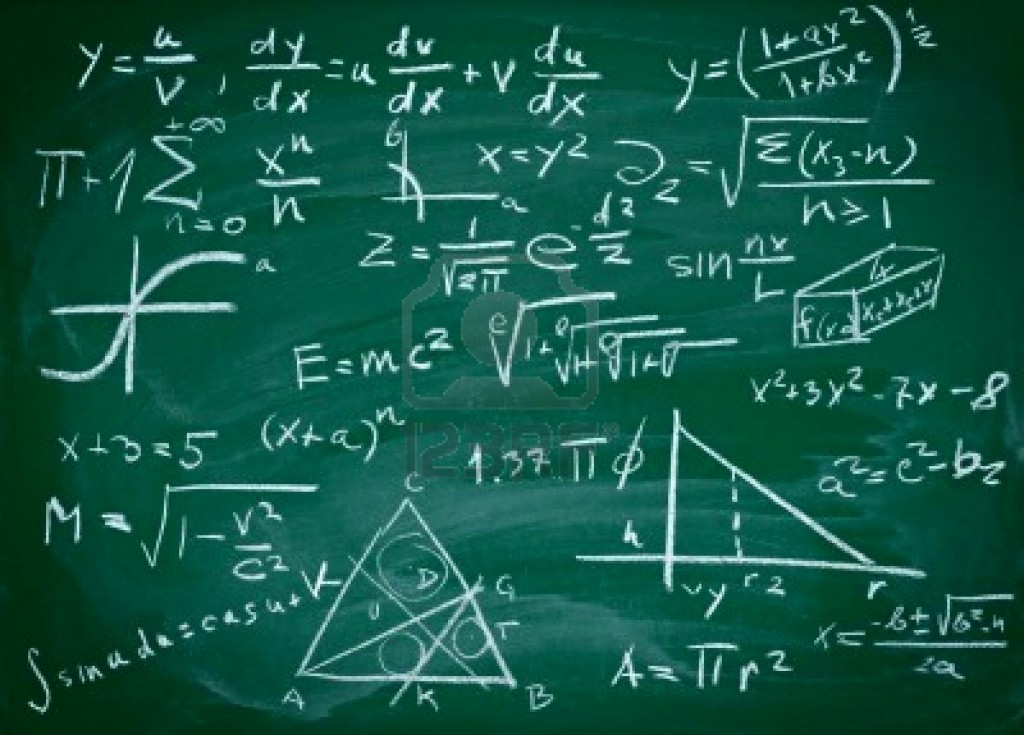 Fifteen years ago the Government of Ontario passed Bill 119, the Red Tape Reduction Act, which included the repeal of Section 115 of the Ontario Insurance Act, the egregious regulation that prevents seniors from accessing the fair market value in their life insurance policies. The Financial Services Commission of Ontario (FSCO) is responsible for promulgating what the “Harris Government” directed back then. Today, 15 years later FSCO’s action adds up to 0 – zip, nada. The June 5, 2015 submission to FSCO by the Life Insurance Settlement Association of Canada (LISAC) covers this flagrant lack of service to the Ontario public (download .pdf). 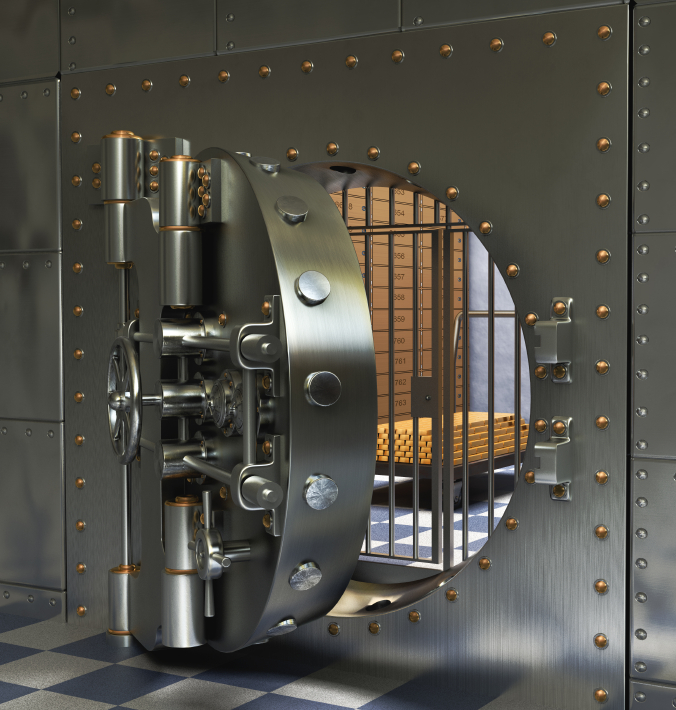 And the money that could have been available to Ontario seniors during that period would add up to billions – that’s with a “B.” Instead, with a little, old-math tutoring (lobbying) of the government by the life insurance industry, all those billions are still in the pockets of the insurance companies.

For the last two decades, the political intent, interest and will has been evident. The Government of Ontario wants to establish a well-regulated life settlement industry in Ontario and yet, the elected official’s voices – seen in many transcripts and bills – have fallen on the deaf ears of bureaucracy. What politicians want the public does not necessarily get – due to lobbying and bureaucratic sclerosis.

Last week, I spoke to over a hundred members of the Northumberland Probus Club in the beautiful town of Cobourg, an hour east of Toronto. I informed them that their rights and their net worth were being undermined by bureaucratic ineptness and I also suggested it was time for their voice to be heard. (Read article – at site, search “Anytime,” insert “insurance professional”). 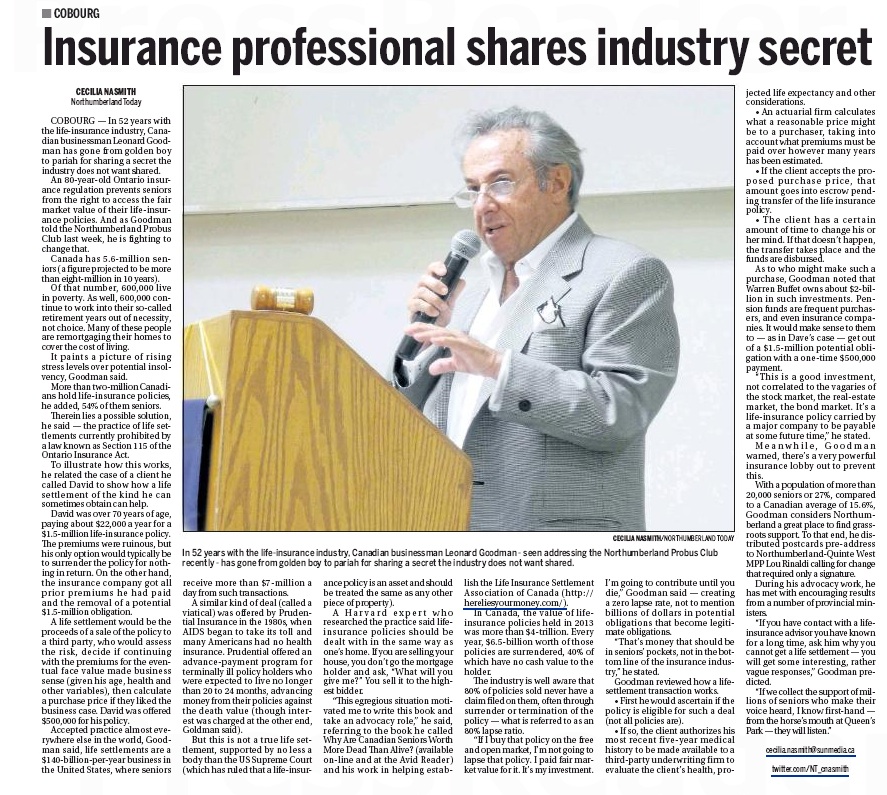 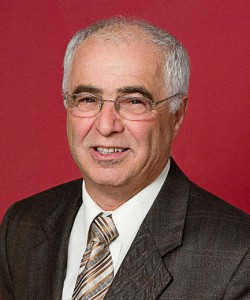 Northumberland County, represented by MPP Lou Rinadli (Liberal), is home to more than 20,000 seniors, which represents 27% of Northumberland’s population. This compares to 15.6% of the population across the province. It’s a beautiful community with many retirees and it probably has more than its share of seniors struggling financially in so-called retirement.

In fact, this financial concern for seniors is reflected in MPP Rinaldi’s introduction of Bill 70 (March 2015) to protect registered retirement savings plans and registered retirement income funds, as well as deferred profit sharing plans, from most creditors. Bill 70 is an important issue for the higher-then-average, aging population in his riding and it has passed second reading. But beware, sometimes “political will” cannot overcome the barrier of big-money lobbying and bureaucratic denial.  Back in 2000, Bill 119 passed the Legislature and yet, its repeal of Section 115 has never happened. If it had, Ontario seniors would have a well-regulated life settlement industry today. That is one of the reasons I met with the Northumberland Probus Club.

I want to thank Lynn Ramsay, President of Northumberland Probus, and Harry Nash, Speaker Coordinator, for inviting me to speak to their members. I came away with a clear impression that Probus members care about the issue of life settlements and the fact that government bureaucracy has prevented them from having access to the hidden value in their life insurance – for at least 15 years.

After just this first event, I saw a distinct difference between Probus and CARP, two organizations advocating for Canadian seniors. For months I have tried to open up a conversation with CARP, particularly with their VP of Advocacy, Susan Eng, to discuss the merits of life settlements. Nothing. Like FSCO, they appear to be stuck in the past. Or stuck in the pockets of life insurance companies. In contrast, Probus invited me to speak to them and from this one meeting more than 70% of the attendees sent a postcard to their MPP stating they wanted action on Section 115. I’ve coined what I consider an apt phrase: Probus cares about seniors, CARP cares about CARP.

Don’t get me wrong, I am open to changing my mind. All it requires is for CARP to open up their mind to a full and open discussion on the merits of life settlements for thousands of their members – most importantly, open up their communications to their members. It’s a crucial conversation that all seniors should be having. It’s going to happen sooner or later, and in the interests of tens-of-thousands of CARP and Probus members, it can’t be soon enough.

Probus is doing something about it. CARP isn’t.